Position: Off the coast of Jaffa Port - just south of Tel-Aviv

Read The End of the Radioship King David?

During 1995 Arutz 2000, an ultra religious and a Sephardic zealot outlet linked to the Shas political party who held five seats in the Knesset, was operating as a land based pirate station in south Tel Aviv on 104 Mhz FM.

The station's purpose was to "return people to religion", they broadcast religious music, which is popular with the Sephardic Jewish community.

April. The station claimed to be broadcasting from the International waters of the Mediterranean, but there was little evidence to support the claim.

July. By the end of July the station had been raided six times by police.

Pinchas Cohen and Nissim Avigdor, as part owner, raised funds to set up an offshore radio station. Other religious businessmen involved are Eli Miss (later pulled out of the project) and Eli Weizman who allowed his Kor Kitchen Equipment company based in Yaffo, Israel to be used as the stations headquarters.

The former Trinity Lightship Number 3 was purchased by a scrap yard for 20,000 Pounds. It was then sold to Dutch agents, headed by Herbert Visser, for 30,000 Pounds and the ship was taken to Portsmouth, near to the Harry Pound scrap yard in Whale Island (almost the same place that the MV Nannel was moored during 1985 - 1986). The lightship was Captained by Ronald Thonhauzer at this time. 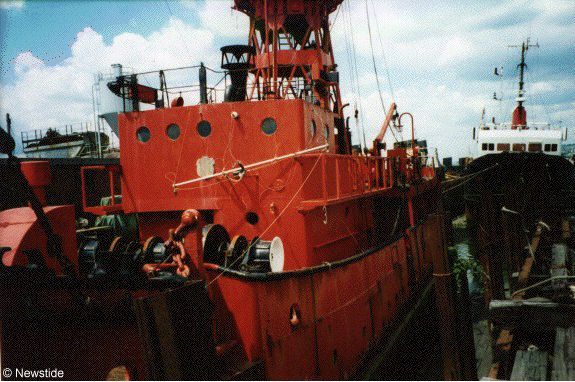 In 1995, Steve Conway took a photo showing the Lightship No. 3 while under conversion to the radioship King David

Worldwide Broadcast Consultants advised the use of a ship with a high mast in Haifa harbour would not require building permission.

During the early summer months, some conversion work was carried out in Portsmouth on the lightship by Ed Bakker, Steve Masters and Mike Watts. Wim Danse (also known as Bill Dance) was employed as a consultant. He had worked on the Voice of Peace during the 1970's and early 1980's as chief engineer and gave advice on operating the radio ship in a hot climate.

The ship was briefly moved to Southampton to have the aerial mast erected, but this work did not take place.

Later work on the lightship ceased due to rumours that the owners had run out of money. The project was delayed, while the ship remained in the harbour.

End of 1995. The lightship had been painted white, aerial mast sections were stored on the rear deck and conversion work had restarted inside the lightship.

The lightship, now owned by a Mauritius based company named Blackbeard/Bluebeard renamed the ship "King David" and reportedly registered it in Panama.

12th January. The King David was taken from Harry Pound scrap yard, to a mooring by the Isle of Wight ferry terminal in Portsmouth.

15th January. In the British Broadcast Bill it says that when a radioship can't be heard in the UK -thus not interfering with communications in the UK- and is broadcasting from external waters, then it is not a pirate radioship. Also no British Citizens were involved in this project. So having the fact that this ship was ment to broadcast off the Tel Aviv coast and from there couldn't be received or interfere within the UK, according to British law the people involved would not be fitting out a pirate radiovessel... And thus wouldn't break the law in the UK....BEFORE ANYTHING STARTED HAPPENING! Herbert Visser (one of the people involved in preparing the project) contacted the British Authorities in the person of Alan Russell (from the Radio Communications Agency, he's THE authority dealing with offshore radio). Russel checked it with the lawyers and came to the conclusion that Visser´s position was right and that nothing could be done. Also, as Israel doesn't have an MOA, the Israeli's involved were also not breaking any law... So the ship was according to the British law not an offshore pirate station, and the people involved were also not breaking any of their laws... The RCA/DTI visited the ship several times, and were constantly informed about the progress... However, after a fax from the Israeli Government asking the British Authorities to do anything they could to prevent the ship moving to Israel, the British Authorities acted...This happened on the request of the British Foreign Ministry. And Alan Russell himself was ordered to undertake action. He decided to take the mast away, which was lying on deck, and left the ship... At this stage , ALL the transmitters were fully on board. It was quite strange that they only took the mast. The aerial mast has still to be returned by the RCA/DTI .

Shortly after the raid, the ship and Lithuanian crew was towed out to sea by the tug Tamar, heading towards Israel.

25th January. Arutz 2000 began to suggest that they had equipped a radio ship, the King David, in England and it was on its way to Israel.

26th January. The Hebrew newspaper "Yediot Ahronot" had a front page article about a pirate ship on it's way to Israel.

27th January. During the evening Arutz 2000 made appeals for money from their land based station situated in Tel Aviv, they claimed the ship was in trouble "somewhere at sea" and was in the process of being rescued and salvaged.

30th January. The King David and the tug Tamar arrived in Lisbon, to undertake some repair work.

The Hebrew newspaper "Yediot Ahronot" quoted Tony Pounds, a shipping agent in Gibraltar. He stated "that there was a problem with the towing cable between the King David and the tug Tamar".

The agents acting between Arutz 2000 in Israel and Tony Pounds are called Shechterman and the Sea Limited, who are based in Haifa, Israel.

The newspaper article added that an Arutz 2000 spokesperson by the name of Sharon said that the King David should reach Israel within one month.

Originally the the ship was to broadcast on FM and AM, with pre recorded programmes stored on "Minidisc". But it emerged that Zee Nimni, owner of Radio Lite and the transmitter used by Arutz 2000 in Israel, was to have his own FM station on the King David.

3rd May. The Arutz 2000 land based transmitter site in south Tel Aviv was raided by Israeli police.

10th May. 08:00 Arutz 2000 announced that they were broadcasting from the King David on 102.6 Mhz FM stereo. During the day they asked for donations to replace equipment that had been confiscated in earlier raids, but they were still broadcasting from land, and were raided at 17:35 by Israeli police.

18:00 Israel Radio stated that Arutz 2000 had been raided because they were interfering with air traffic control at Tel Aviv's Ben Gurion International Airport.

13th May. Arutz 2000 resumed broadcasting from their land based transmitter. Donations were again asked for.

Later they announced that the King David had arrived off the coast of Ashdod.

20th May. Tel Aviv's Ben Gurion Airport was forced to close for a couple of hours due to serious interference from pirate radios in the Tel Aviv area.

The police and Ministry of Communications tracked down the source, a land based station calling itself "Voice of Peace", this action was given fifteen minutes of news coverage on the state radio and television services.

As a result of this most of the land based stations surrounding Tel Aviv, including Arutz 2000 temporarily closed down.

28th August. 15:00 Test broadcasts commenced from the King David on 102.6 Mhz FM. The ship was anchored twenty miles off the coast of south Tel Aviv, opposite the Jaffa Port.

The station moto became "Alpayim al hamayim" (2000 on the water).

Arutz 2000 are sandwiched between Tel Aviv's two local stations, Radio Tel Aviv (102 Mhz, which comes into service on 1st September) and Radio Lelo Hafsaka (non stop radio 103 Mhz) and is thought that it will change.

The Israeli press were unusually reluctant to publish details about the arrival of the new station. To date their have been no photographs published or mention of them on the national or local radio stations.

20th October. More test broadcasts are made on 102.6 Mhz, but the signal strength was very weak.

Late December. Between the 20th and 31st, Arutz 2000 changed frequency to 101.8 Mhz (the old Radio Gal frequency) and are now sandwiched between Radio Tel-Aviv on 102 Mhz,and Voice of the Soul on 101.5 Mhz, an ultra religious powerful land based pirate based in Jerusalem.

22nd February. Arutz 2000 closed down due to severe weather conditions.

6th May. It was learnt that Arutz 2000 are broadcasting from land based studios and transmitter site, a former owner of the station said that broadcasts would resume from the ship, King David, in FM and high power AM when funds could be found.

3rd June. Arutz 2000 signal was improved. It was rumoured that this was due to broadcasts resuming from the King David, but it was learnt that they are still broadcasting from land based studios and transmitter site, due to the station being in debit to the value of 1 million US Dollars.

May. The King David is still at anchor off the coast of Jaffa port, and no buyer has yet been found for the ship. Arutz 2000 are still on the air on 102.6 FM, but from landbased transmitters in the religious town of Bnei-Brak near Tel-Aviv.

The King David anchoring off Tel Aviv on November 9th 1999