The OFFSHORE 98 broadcasts during the Easter 1999 weekend brought a few offshore radio firsts:

The Offshore Radio Guide asked Frank from OFFSHORE 98 to answer some questions about the venture.

The Offshore Radio Guide (ORG): How did the idea come up to start with "Offshore 98" the first "real" European offshore radio station of the nineties since Radio Caroline had to close down in 1990?

Frank: The idea was born in 1995. At first we thought of a small ship with a balloon antenna. We thought if we didn´t make it this time we wouldn´t see a real offshore radio in the North Sea anymore. We had gained much experience on landbased stations before (Radio Valentine, Radio Benelux, Radio Telstar). But as the top a real offshore radio station was missing. "OFFSHORE 98" can be seen as a "trophy" for all that work.

ORG: Most of the programmes and jingles were produced last year, weren´t they - thus the name Offshore 98" instead of "Offshore 99"? 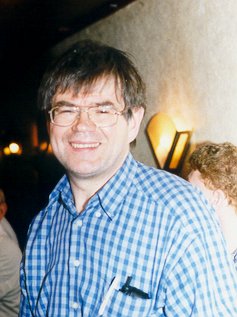 ORG: What kind of ship did you use? What about the size, its capabilties and the captain? Was there a mast to fit the antenna?

Frank: We chartered a motor ship being 34 metres long, 7 metres wide and 3 metres deep. The "MV Morning Star" was our fake name for it. The real name and its home harbour are kept secrete. By the way the Dutch MV Morgenster isn´t existing any longer and was not the ship we used. The vessel had three masts (a tall one and two smaller ones) for shortwave, mediumwave and longwave.

ORG: When and from which harbour did you leave? Did you stay on one certain place or were you sailing for most of the time? Where did you drop anchor?

Frank: We started on Good Friday morning when we left a bigger German harbour. So that was not Scheveningen in the Netherlands, as A.J. Beirens had reported maybe to mislead the authorities. We didn´t drop anchor at any time, but were moving all the time. The place where the transmissions took place was west of the isle of Helgoland.

ORG: Did you install the transmitters and the antennas on high seas? What kind of antenna system did you use?

Frank: Everyting was installed in the international waters outside the 12-mile-limit. For longwave we installed a t-antenna, for mediumwave a long wire and for shortwave a dipole antenna.

ORG: What kind of transmitters did you use? What about frequencies and their capacity?

Frank: The longwave transmitter (279 kHz) was a commercial one which used in the former GDR for air traffic. It had a capacity of 100 watts. The medium wave transmitter (1566 kHz) was a home built one from a Dutch landbased pirate and was capable to transmit 200 watts. The shortwave transmitter (6210 kHz) was also a self-built one delivered by Radio Benelux with a capacity of 100 watts. Naturally the antennas were to close together so there was some interference. Therefore a large part of the capacity was swallowed, and we ended up just having ¼ of the possible efficiency.

ORG: When did you start transmitting and when were the programmes finished?

Frank: We started on Good Friday April 2nd 1999 from 6 to 8 p.m. EST with test transmissions. We officially opened on Saturday morning at six o´clock EST and switched the transmitters on one by one. We closed down on Easter Monday April 5th 1999 at one o´clock a.m. EST having broadcast for almost 50 hours.

ORG: How many people were on board the ship? Did the ship have a crew on board?

ORG: Was there a small studio on board for live broadcasts? If yes, what equipment did you use?

Frank: In the mess room we installed a studio consisting of the relatively simple equipment used by Radio Telstar. We actually had a lot of live broadcasts, more than planned. The main reason was that 12 hours of Dutch programmes had been preproduced but were sadly lost after being posted. But there were preproduced English and German programmes as well (12 hours each). There were continuous live messages in different languages all throughout the programmes. 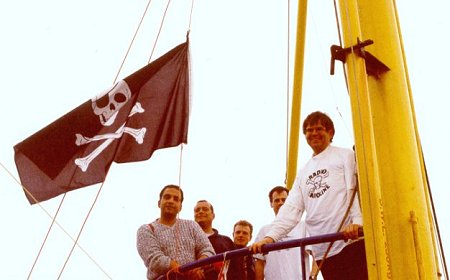 ORG: What about the weather?

Frank: We experienced almost all kind of weather: We had lots of sun but also some fog and even quite rough sea.

ORG: What didn´t work out as planned?

Frank: The experiment using three different antennas and transmitters (using a longwave transmitter was another offshore radio first) didn´t produce that satisfying results we had expected. So the capacity couldn´t be used optimally. Besides that both the preparations and the realisation of the project went on without problems.

ORG: What was the mood on board? Were you nervous especially because of critical warnings by expert offshore Herbert Visser who predicted the immediate intervention of the authorities? Did you get to sleep?

Frank: The mood on board was really good all the time. We had the best offshore radio feeling without being seasick. The tension was quite low but rose once when we were obviously followed by another ship and our captain accelerated our speed to full capacity. It soon proved to be an harmless vessel with no intentions to intervene. From that momemt on, even the maritime crew had fun with the project. We didn´t sleep too much during these days and were a bit tired because of all the strain. But we got a huge kick out of this adventure.

ORG: You used an address in Offenburg/Germany. How was the response? How many reception reports came in from which countries?

ORG: Was there any media reaction on Offshore 98 in terms of radio, newspapers etc.?

Frank: We didn´t put enough effort into public affairs. That was because there wasn´t a 100% certain weather forecast and we didn´t want to wake up any "sleeping dogs". We just wanted to realize the project. There were few reports in Radio Netherland´s Media Network and the local press in Offenburg. The RADIO NEWS will of course have a feature, and maybe there will be an article in the German RADIO HOEREN & SCANNEN.

ORG: To conclude: Is there any overall critisism on the project? Are there plans of going ahead with the project? Was it worth all the efforts you put in it?

Frank: We just want others to follow our example and to improve the methods of realizing such a weekend-only offshore radio station. It was absolutely worth the effort, but of course not financially. It was lots of fun and we gained much experience and knowledge.

ORG: Was there any sponsor? Are there still bills to be paid?

Frank: It was a non-profit venture, and we had no sponsor. There are no debts left. Unfortunately we aren´t able to offer tapes of the broadcasts to be purchased. But if you´re searching for even more in-depth information on Offshore 98 with even more pictures, why not write to the following address for a sample copy of the German RADIO NEWS. The next (and final) issue is out now and costs 10 German Marks including postage and package. It will become a double issue.