Position: Anchored 3 miles off the coast of Tel-Aviv 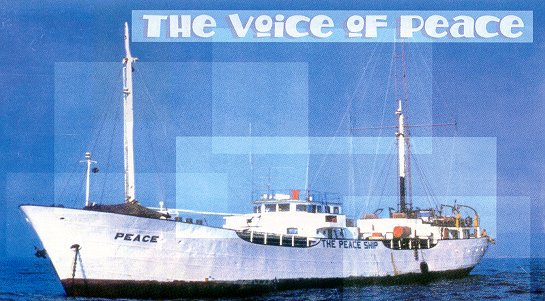 Picture Gallery: Voice of Peace in 1986

The Voice of Peace ship "MV Peace" sailed from Amsterdam. They tried to raise funds for the station while sailing to New York, where the ship stayed for 3 years through lack of funds.

15th March. A test broadcast was made from the Voice of Peace, while in New York harbor.

26th May. Regular programmes commenced from the Voice of Peace.

4th November. The Voice of Peace closed down through lack of advertising .

The ship was taken back to Marseilles, France.

28th May. The Voice of Peace left Marseilles, and broadcast a thank you programme to the people of France.

June. The MV Peace tried to sail through the Suez cannal.

January. The MV Peace is anchored off Tel Aviv.

January. Due to the Gulf War the MV Peace moves to 10 miles off Tel Aviv coast.

December. Voice of Peace programmes are broadcast on Euronet via the European satellite "Astra".

1st October. The Voice of Peace closes down. It does not resume broadcasting from land-based studios.

28th November. The MV Peace is sunk fifteen miles off the Israeli coast.

In May of 1973, Israels most famous offshore radio station took to the air. Like others before it changed the face of (Israeli) broadcasting. Although not particularly aimed at the Israeli audience, it quickly took off in Israel, and became the No.1 station amongst the youth. So much so, that in 1976,  the Israel Broadcasting Authority (IBA) completely revamped all their stations (exactly like England nine years earlier),and Israel´s first ever pop radio station was born - Reshet gimmel - Network Three - to compete directly with the Voice Of Peace.

A survey carried out by state radio station places the Voice of Peace as the most popular station, taking 40% of the listeners.

A lot happened to the VOP in their 20 year history, but there is no doubt that it left its mark on Israeli and world broadcasting. Many famous DJ's broadcast with the VOP over the years - Tony Allan, Crispian St John (Howard Rose), and Kenny Page to mention just three. For a full history of the VOP, I recommend Jim Parkes' "Encyclopedia Of Offshore Radio". Ex-VOP-DJ Sagi Levek features Jim Parkes' Voice of Peace history on an own excellent web site.

The final days of the VOP occured when Abie Nathan decided that because the Israeli government and the PLO were talking to each other, there was no need for the VOP anymore. The REAL reasons were that debts were mounting, competition from Israeli legal stations and the soon to be introduced local commercial stations in Israel, all played a factor in the closure of the VOP.

1st October. 09:00 the last program was aired from the Voice of Peace, giving some of the history of the station.

The mayor of Tel Aviv, Shlomo Lahat went out to the ship and took part in  the broadcast at 13:00, he stated he would promise an anchorage for the MV Peace in Tel Aviv harbour and the ship would be rebuilt as a peace museum.

The station closed with Pete Seeger's "We shall Overcome" instead of theusual station theme.

14:57 The transmitters were switched off and the Voice of Peace closed down.

For the next few days the MV Peace remained anchored off the coast of Tel Aviv, waiting to be taken into port and converted into a museum.

The Government kept changing it's mind over plans for the ship. While still offshore the transmitters were run and several test broadcasts were made.

Abie Nathan grew impatient and ordered the studios and transmitters to be disassembled.

Afterwards the MV Peace sailed to Ashdod where the studio equipment, generators and transmitter parts were removed from the ship.

28th November. The MV Peace set sail on her final voyage, fifteen miles off the Israeli coast, reaching the destination at about 12:00.

The hull plugs were removed from the engine room and lower hold, and the pumps switched on, to pump water into the ship.

19:33 the ship sank, the last pictures being taken by a Reuters agency photographer.

The two 20,000 Watt Harris valve transmitters and studio equipment was placed in storage in a Tel Aviv warehouse, the location is unknown.

The cartridge cassettes of VoP jingles, CD's and records were given to some Israeli people.

While visiting Washington D.C. USA, Abie Nathan suffered a stroke which left him partially paralysed. He is now recovering in a rest home in Ramat Hasharon, just outside of Tel Aviv.