Position: Off the coast of Tel-Aviv 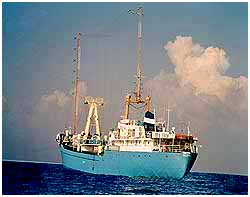 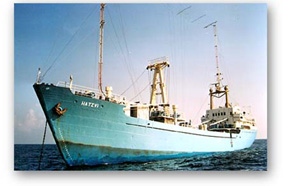 A mirror site of the Arutz 7 homepage

The finance for the station came from a religious Jewish millionaire who lives in the UK, and many donors from the Bet-El Yeshiva Center.

The idea for the station was Yom Kippur War hero Yaakov "Ketzaleh" Katz, Executive Director of the Beit El Yeshiva Center Institutions, who is more commonly known as "Ketzele" in Beit El.

The station was created by the Bet-El Torah Institution, a group of Jewish settlers in Judea and Samaria identified with the settler movement, headed by Rav Zalman Baruch Melamed, his wife, Shulamit who was the driving force and chief administrator, and their son who broadcasts a four minute monologue on Jewish law every day. He is one of one hundred who have broadcast time allocated to them.

They believed that Israeli radio was biased against their right wing ideology.

Because ultra-orthodox Jews are not allowed to hear a woman's voice singing, Arutz Sheva only broadcasts records by male artists on the religious frequencies of 711 Khz and 98.7 Mhz.

The MV Hatzvi was anchored close to the MV Peace ship, home of the offshore station The Voice of Peace, just outside of Israeli territorial waters and directly across from the Tel Aviv Hilton Hotel.

Programmes are prerecorded onto cassettes in the studio in Beit El, and then taken out to the ship for broadcasting. Israeli broadcasters on board the ship act as technical operators and load the tapes ready for broadcasting.

On the hour "Kol Yisrael News" broadcasts are relayed.

The station´s format of Hebrew only lyrics and soft sell patriotism was an instant suuccess with the Israeli public. Whereever one went, especially in the Tel Aviv/Centre of Israel area, one could hear Arutz 7 - in taxi cabs, on buses (radio is always broadcast on Israeli buses, especially on news time). Slowly but surely, Arutz 7 became one of the top three stations in Israel.

The broadcast hours were 07:00 - 24:00 on weekdays, the station does not broadcast on Shabbat (Friday sunset to Saturday sunset) or national holidays.

The ship went to the port of Haifa for the Lloyd's of London register insurance check up and passed.

Slowly but surely, Arutz 7 became a big hit in Israel, playing Hebrew songs during the daytime hours and religious programmes during the evening hours, with a smatter here and there of right wing propaganda. Finally there was a radio station that broadcast the views of the Israeli right wing.

Right wing MPs thought for a long time that the IBA was a left wing run operation, and their views were not heard. Now they had a mouthpiece of their own - Arutz 7!

20th July. Arutz Sheva begin announcements that as from the evening of the the 27th of July, for a period of nine days the station will be off air during the "nine days of Av".

27th July. The MV Hatzvi docks in Ashdod. The antenna is dismantled for repair.

31st July. Israeli officials, police and soldiers raided the MV Hatzvi while in the port of Ashdod taking on supplies. Minister Ms Aloni, for the authorities claimed the ship had been broadcasting while inside territorial waters.

The stations management countered that the date they were claimed to have broadcast while inside Israeli territorial waters was within the "nine days of Av", a period of mourning on the Jewish calendar during which it is forbidden to broadcast music. In fact they had announced for over a week that they would be off air for the full nine days.

Statements were taken from eight of the ships crew, then four transmitters were dismantled and removed from the ship.

The raid was the result of the Knesset parliament's recent laws that have outlawed unlicensed radio / television stations. An Israeli Government spokesman said that if the Voice of Peace had still been broadcasting, that station would have been raided as well.

The raid caused an uprising in the Knesset among its supporters and critics, it was rumoured that Arts, Science and Communications Minister, Shulamit Aloni, had recommended the Knesset Committee on the Second Channel Radio and TV Broadcasts to give special consideration to Arutz Sheva and the Voice of Peace.

After the raid, the station received many offers of assistance and equipment to return to the air.

The leader of the opposition party, Benjamin Netanyahu visited the MV Hatzvi. This visit was broadcast by all the Israeli media.

The station now broadcasts twenty-four hours a day, except over Shabbat. 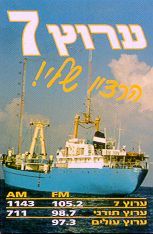 22nd May. As Arutz Sheva prepared to dock in Ashdod for the Jewish holiday of Shavuot (23rd and 24th May) they were informed by reliable sources that Shulamit Aloni (Minister of Communications) and Moshe Shahal (Minister of Internal Security) were planning to send the police to raid the MV Hatzvi, confiscate broadcasting equipment and close the station down.

At sunset the MV Hatzvi and crew remained outside of Israeli territorial waters despite being very low on fuel and supplies.

Reshet Gimmel (Israel Radios pop channel) goes over to a format of  Hebew music only - a format used by Arutz 7 from the very beginning of  broadcasting . This is yet another case of the influence of offshore radio on the legal stations ashore.

Reshet Gimmels ratings were at an all time low, and to save the station from closing, they completely changed their format to compete with the highly popular Arutz 7 format of playing only Hebrew music.

As a footnote to the above, Reshet Gimmel "moved frequency" very close to the Arutz 7 frequency of 105.2 FM in the Tel-Aviv area for the first few days of broadcasting, and numerous complaints were made to the communications ministry of interference to Arutz 7. These complaints were investigated and found to be true, and Reshet Gimmel were told that their broadcasts on that frequency were illegal and to be stopped as soon as possible. They were stopped indeed, and broadcasts were resumed on 89.7 FM, where they are broadcasting today.

Several threats have been made to close Arutz 7 down, but as this would probably lead to the downfall of the current right wing Likud government, this seems unlikely.

May. As of today as Arutz 7 nears its 10 year anniversary, the station seems to be going from strength to strength, and there is now talk of a landbased license in the near future for them.