Position: Anchored off the coast of Bat-Yam (south of Tel-Aviv ) 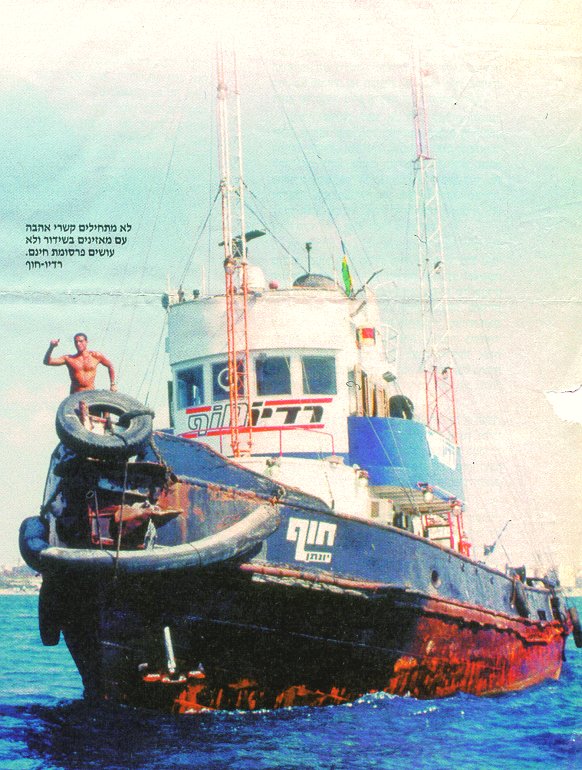 Before acquiring the MV Hof, the station directors claimed to have looked at the possibility of using the MV Ross Revenge but dropped the idea when they found the ship was not air conditioned.

Conditions on board the MV Hof were claimed to be cramped, and the studio equipment was of the domestic / disco variety. The station's main audience was teenagers, and a lot of the programmes were filled with music programmes interspersed with teenagers calling in "on air" to send greetings to their friends. DJ's were young and inexperienced and usually Israeli ex-disco DJ's. At best, the station sounded very amateurish.

August. During the second week of August, before the Voice of Peace closed down, Radio Hof (Coastal Radio/Radio Beach) started broadcasting.

The station manager, Barouk Ben David, stated that same commercial mistakes the Voice of Peace had made would not be made by his station, the advertising staff were American trained and understood how to sell "air time".

After the Voice of Peace closed on the 1st October all the former staff were offered jobs with Radio Hof, but all turned the offer down.

During storms that hit Israel in the evening, the M/V Hof drifted to a position off the coast of Herzlia, where the ship eventually ran aground.

When rescue crews came to take off the staff, it was noted that there were only two people on board - the captain, and another crew member. This raised the suspicion of the Communication Ministry officials, and it was presumed that the broadcasts were not coming from the ship at all, and it was just a cover for landbased operations.

Most of the station staff left after they were not paid, and Station Manager Barouk Ben David was sacked after the drifting incident.

In early April the station moved its operation inland, becoming an unlicensed station. The station did resume broadcasting, but on very low power, it is not known if they were from the ship or not. Eventually the broadcasts ceased.

Radio Hof resumed broadcasting again, but again from land, and after a couple of raids, were never heard of again.

Radio Hof is broadcasting from Eilat and has an Internet stream.