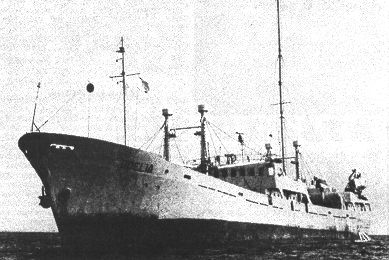 Paul Greenwald became obsessed with the idea of running his own TV station, the fact that private radio and TV stations were banned in Israel bothered him, encouraged by the success of the 'Voice of Peace' he began to seek out backers for his proposed offshore TV station.

Greenwald placed an advertisement in a newspaper for staff to run his TV station, several hundred young girls replied wanting to make a career on the screen.

Greenwald travelled to Greece in search of a suitable ship, finally in Paraus he met ship owner Nestor Pierrakios who owned a ship built in 1958 which was regarded as valueless, the two made an agreement and Nestor became a partner of Odelia TV.

Nestor Pierrakios had the ship renovated and manned it with crew from his own firm, for a cost of $500,000 Dollars.

Towards the end of the year the refitting was completed.

Greenwald informed the Israeli ambassador in Greece of his intentions to sail a ship capable of broadcasting television programs to the coast of Israel, he asked him to conform with all the laws and regulations, and established that the Israeli Navy would not fire at or arrest the ship.

5th April. The MV Odelia entered the port of Ashdod to take on supplies and undertake some minor repairs.

The ship is thoroughly checked by the harbour authorities, and they are not surprised when they discover that the ship was capable of broadcasting as they had been informed by the Israeli ambassador in Athens of her destination.

April. A few days later the ship anchored about four miles offshore, close to the MV Peace ship. The Israeli authorities warned the crew not to begin broadcasting, but this advice was ignored.

Shortly afterwards the first test broadcast was made, reception was good along the coastal region and with a DX antenna reception was possible about from about twenty-five miles inland.

The authorities feared that the station was going to be used for propaganda broadcasts for the forthcoming election campaign in June. Elections were also to take place in Cyprus and Greece latter in the year, and it was thought that the 'Odelia' might become involved with these as well.

The Israeli Communications Ministry announced that it would shortly begin transmitting on the same frequency as used by Odelia TV.

25th June. The Supreme Judge, Meir Shamgar, granted a provisional injunction and ordered the Communications Ministry to justify it's actions within fourteen days, and until the final trial it was forbidden to interfere with or prevent the Odelia TV station from broadcasting.

1st December. Greenwald informed Communication Minister, Mordechai Zipori, that broadcasts from Odelia TV would resume in Arabic and English, the programmes were aimed at Jordan and the 'whole of the Middle East'.

7th December. The Government refused radio telephone services to the ship except in the event of emergency, and the harbour authorities had been instructed not to assist the 'Odelia' in any fashion. Latter that day the station ceased broadcasting until 'an agreement can be achieved with the Communications Ministry'.

23rd December. The ship set sail for Cyprus, to take on fresh supplies, never to be heard of again. 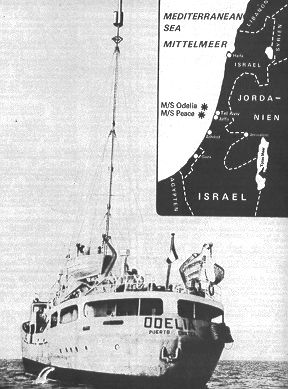