Position: Anchored off the coast of Haifa

The programmes were made in a studio on land and a low power FM link was used to the ship to rebroadcast the programs. 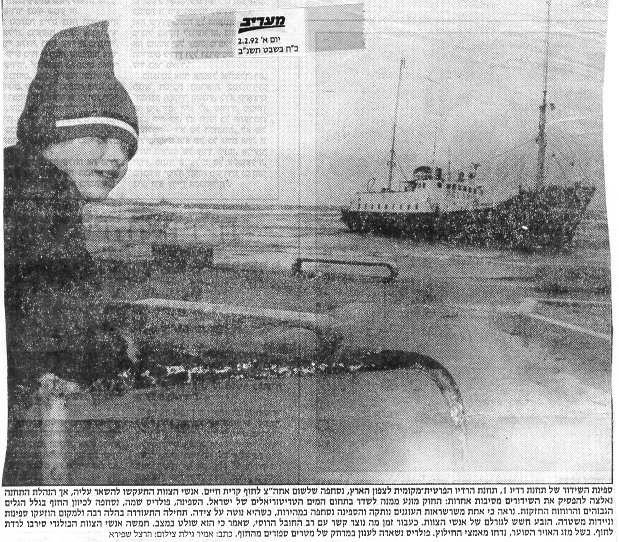 November. After making contact with German Jews who were willing to put forward the $1,000,000 investment required, Ghiora Izsak ,who was working for Arutz Sheva as their marketing manager, began to set up the station along the lines of the commercial stations of the USA.

One of the main differences of Radio 1 was that it broadcast twenty-four hours a day, seven days a week with no ideological slants.

An office was set up in Haifa to sell air time.

The ship was leased from a Greek shipping company, who purchased it from the Maritime Officres School in Acre.

Radio 1 was to have began broadcasts with a one months trail, broacasting only music. But because the start up date coincided with the deadline given to the Iraqi withdrawal from Kuwait, a full broadcast service was introduced from the very start.

Unlike the Voice of Peace and Arutz 7, Radio One concentrated only on the Haifa and surrounding areas. The station started the concept of local/regional broadcasting in Israel.

23rd January. The Jerusalem Post carried a small artical on the station which stated that the German investors did not know that the station was to be a 'Pirate'/offshore station.

1st February. The ship was wrecked in a storm when it ran aground.

Programmes were then broadcast from land based transmitters, but soon afterwards local authorities raided the transmitter site.

It was stated that the owners were interested in purchasing the MV Communicator.

The station had become very popular in the Haifa and surrounding areas.

Even the Mayor of Haifa broadcast a show each week form the station.

Towards the end of 1994 the station closed down, in preparation for applying for a tender for the local commercial radio in Israel. The law stated that any station broadcasting after the application date would be disqualified from applying.

December. The application was made. Radio One competed with other stations for the Haifa area franchise - and the won.