The MV Ross Revenge in Southend-on-Sea 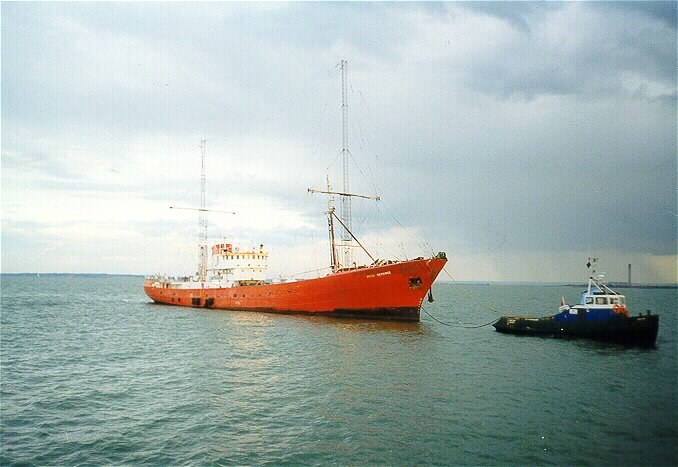 Radio Caroline´s ship the MV Ross Revenge crossed the Thames Estuary on June 21st 1999, the longest day of the year, and berthed at Southend pier head. The tug Horton skippered by Andy Wood nudged the 1000 ton ship into position as dusk fell. The crew worked all week preparing the ship for public display. The boat opened for tours on Tuesday June 30th. The purpose of the Southend summer visit was to earn revenue for more ship repairs and fresh broadcasting projects. 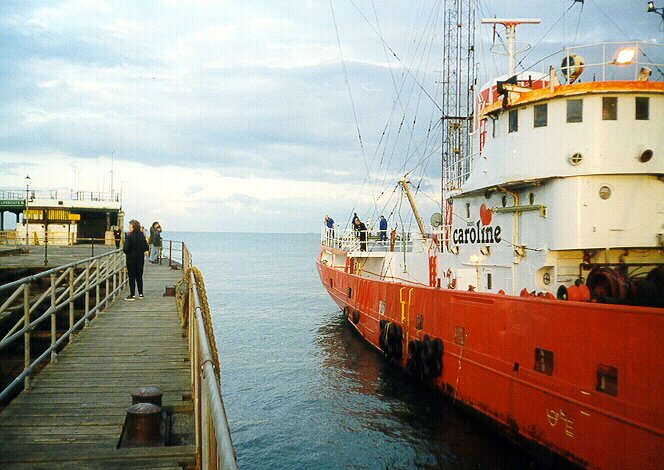 A full tour of the ship with opportunities to take photographs or video footage had been priced at £3.00 adults and £2.00 children. A full range of Caroline merchandise including photos, videos caps and Tee shirts could be purchased in our on-board shop.

Caroline live from the Ross Revenge

Visitors to the Ross throughout most of August had the added thrill of seeing Radio Caroline in full operation with 24 hour a day live transmissions courtesy of a 28 day RSL, however those touring the ship on weekends will no doubt have found it strange that music was emanating from the ship but with no apparent DJ’s present to play it. Due to the unprecedented popularity of the boat, weekends could be quite hectic on board. Transmissions were therefore sent from Caroline’s studios in Maidstone via ISDN to the ship. This could not prevent visitors from seeing the studios but it could give them an idea of what it was like when a rescue party first boarded the Mary Celeste…… 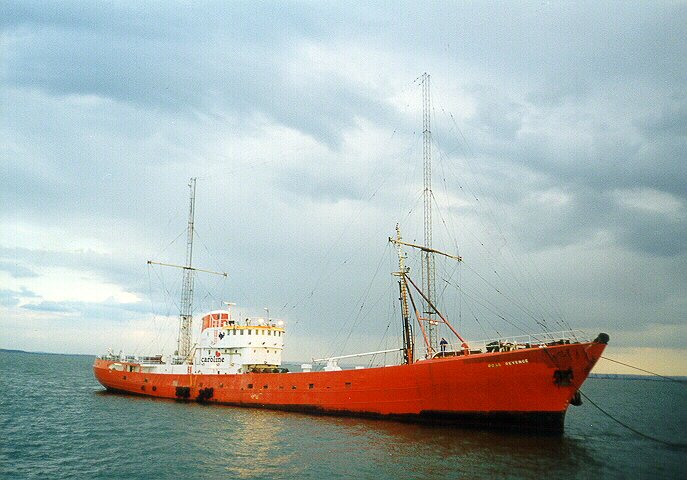 All three pictures above © Mike Webb 1999

Caroline to the rescue

Many times in its chequered history the much maligned Radio Caroline in all her guises has come to the aid of Government and the common man alike and even in her 32nd year she is still ready to assist as and when necessary.

As the Ross Revenge began her term of office as one of Southend’s major attractions for the summer, a power cable was accidentally severed that supplies the world famous pier with electricity for all its amenities.

In order that the restaurant, bar and gift shops could all stay open the Ross, moored at the end of the mile long structure, gave her generators over to supply the pier for over three days while the cable was mended.

"It was lucky that the Ross Revenge was there," one pier worker said. "It would have been a considerable inconvenience not only for staff but for the holiday makers."

Birthday celebrations for the ‘Lady’

The station hopes made a high powered simul-cast on August 14th to celebrate Radio Caroline’s 32 years of broadcasting. Programmes were aired both on its Satellite frequency, on its 1503 KHZ AM frequency and on powerful 5935 kHz shortwave transmitter. 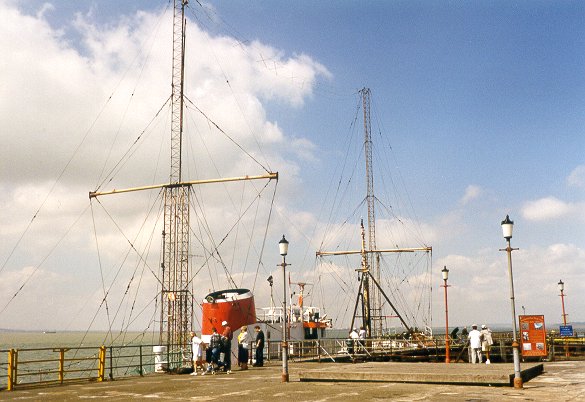 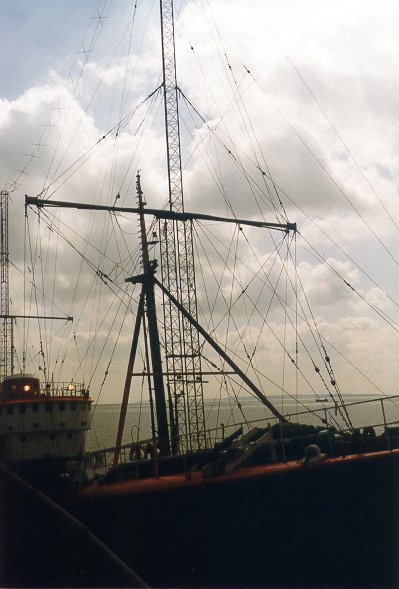 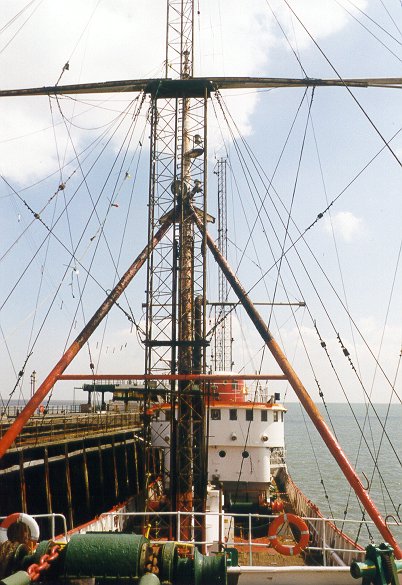 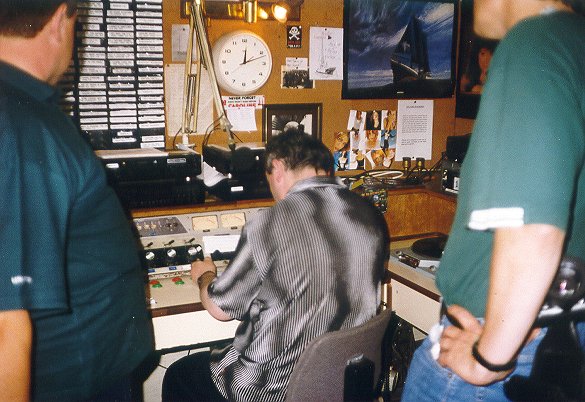 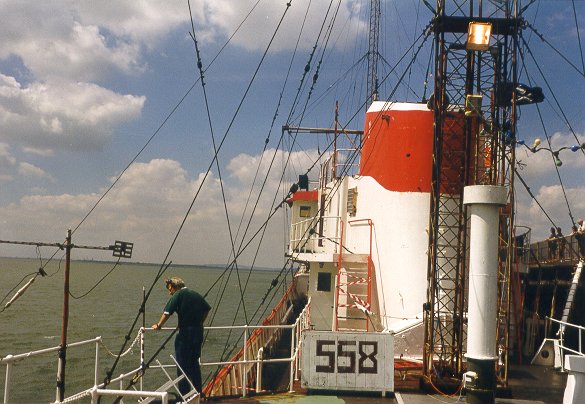 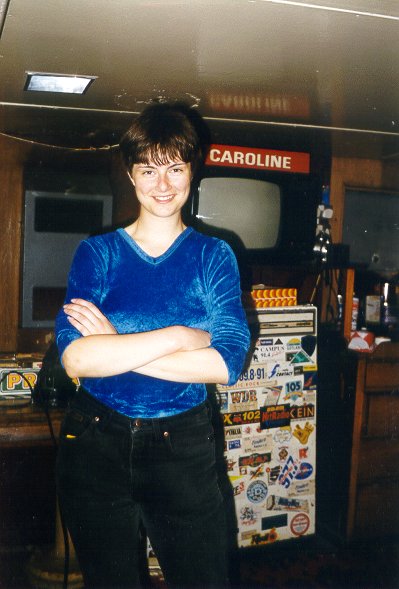 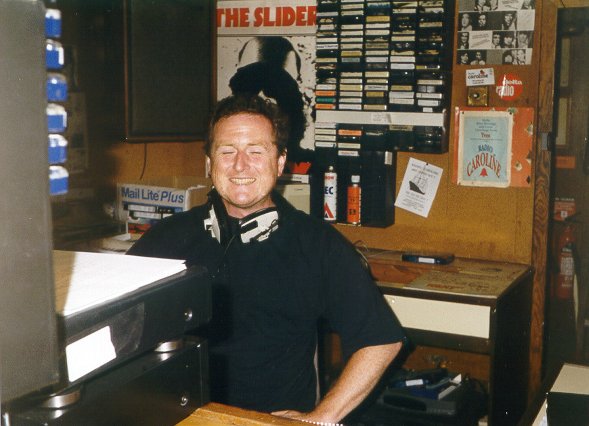 Thanks to Freddie and Jan who made the above seven pictures available. 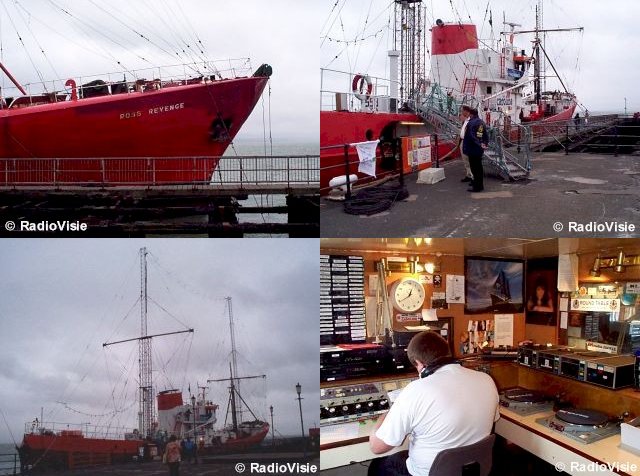 Many thanks for these pictures to https://www.radiovisie.com 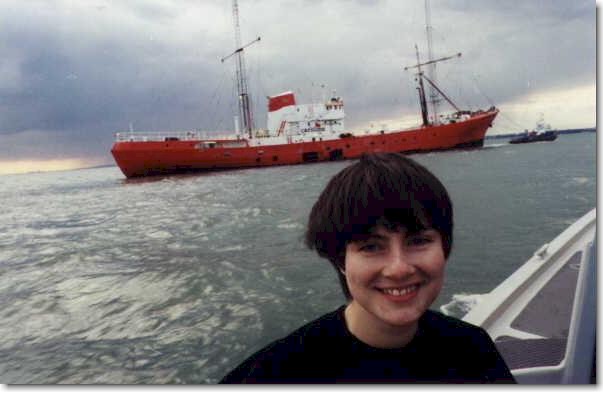 Seeing Ross Revenge for the first time was Caroline newest and youngest presenter DJ Sarah Miles who travelled out into the estuary to meet the ship. Ex London station Liberty, DJ Sarah said 'The ship has obviously been through tough times but has survived come what may, just like Radio Caroline. All my broadcast heroes have worked on Caroline, I'm so proud to be following in their footsteps'.